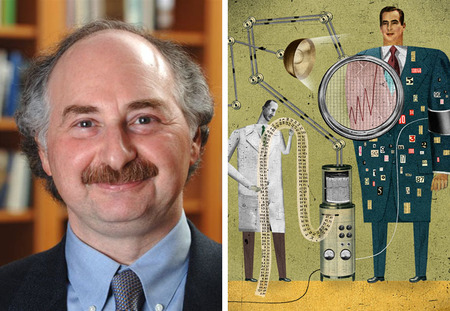 Join the Notre Dame Institute for Advanced Study for a lecture by Jerry Z. Muller entitled “Our Metric Epidemic: Diagnosis and Prognosis.”

In recent decades, ever more of the institutions that shape our lives have sought to replace management through judgment based on experience with standardized measures of performance (“metrics”), and to reward and punish individuals and institutions accordingly, either in monetary terms (pay for performance) or honorific terms (rankings, ratings). This formula is often touted as a magic bullet that will improve the functioning of schools, universities, police forces, businesses, and health care. But the results are often counterproductive and dysfunctional, leading to short-termism, demotivation of employees, and other ills. Professor Muller’s talk will examine the sources of metric fixation, its links to managerial ideology, and its functions and dysfunctions in contemporary institutions.

Jerry Z. Muller is professor of history at the Catholic University of America in Washington DC. He is the author of six books, including Adam Smith in His Time and Ours; Conservatism: An Anthology of Social and Political Thought from David Hume to the Present; The Mind and the Market: Capitalism in Modern European Thought, and most recently The Tyranny of Metrics, published by Princeton University Press in February, 2018. His lecture series, “Thinking about Capitalism,” is available from The Great Courses. He publishes frequently on matters of public policy and international affairs in general interest magazines and newspapers, such as Foreign Affairs, The American Interest, and the Wall Street Journal, including  “Capitalism and Inequality: What the Right and the Left Get Wrong” (Foreign Affairs, 2013).

The event is open to all students, staff, faculty, and members of the public.