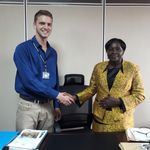 Adam Moeller (Class of 2018, history and economics) had an interest in colonialism since high school. In college he wanted to learn more about geographic areas different from the United States, which was always the focus of his history classes in high school. As a resident of Sorin Hall, Adam became familiar with his dorm’s relationship with a Center for Social Concerns International Summer Service Learning Program (ISSLP) in conjunction with St. Jude Primary School in Jinja, Uganda. The opportunity presented a chance for Adam to explore his interest in education and see how colonialism still affects the structure of modern schooling there. However, a few weeks after arriving in the summer after his sophomore year, he was observing a retreat at the local high school and did not expect what was coming next.

“At the time, there was a retreat going on and they were discussing sex,” Adam said. “There were crude and blunt messages delivered to children equating homosexuals to pedophiles.” It was at that point that Adam’s summer experience in 2016 influenced what he would pursue during the summer of 2017, an influence that eventually led to the topic of his senior thesis.

In the years between 2009 and 2014 an anti-homosexuality bill was in the process of being passed in Uganda. “At that time, lots of journalists were interested in the subject. Once the bill was nullified, people stopped showing interest. Everyone wanted to know what would happen now, but no one wanted to ask how it got that way in the first place,” Adam said. With that in mind, Adam embarked on an academically focused journey in the summer of 2017 to learn more about the climate that allowed such a law to be passed.

In a country where most LGBT individuals are too afraid to be open about their lives, Adam had a relatively difficult time getting in touch with subjects to talk about their experiences as members of the LGBT community. “People are constantly attacked by the media and the government because of their orientation. So it is not easy to find people in the open willing to talk about this,” Adam said. Fortunately, there are multiple non-governmental organizations (NGOs) and civil service organizations that worked for and with LGBT individuals and were willing to support his research project.

“Having to go through NGOs limited who I could talk to. However, a sort of snowball effect happened as I was able to find more people to talk to.” Adam said. During the interviews, Adam talked with LGBT people about their experiences growing up in a society where homosexuals were frequently subjected to harassment, discrimination, violence, and isolation. The conversations had an effect on Adam. “I got emotionally connected with the people I talked to. It was discouraging to repeatedly hear how poorly these people were treated and at the same time remain unbiased and academic in my approach,” Adam revealed.

Adam’s experience in Uganda was very rewarding, but it could not have happened without the resources available to him through the Flatley Center for Undergraduate Scholarly Engagement (CUSE). “The funding I received from CUSE totalled to about a third of my overall grant money. This money was very useful for me as it went to my traveling expenses, lodging, and food. Without it, I simply could not have had this experience without going into debt.” He also mentioned that the process of applying for research grants alone was a helpful process. “One thing people may not realize is that applying for research grants helps you hone in on what it is you want to do exactly,” Adam said.

CUSE’s Sorin Scholars program was a catalyst in getting Adam to think about pursuing undergraduate research. “The peer effect of being around people during my sophomore year who were motivated not only to do research but also to do research in a wide array of academic subjects was very influential.” Adam said. Adam’s interest in exploring academic topics for his research and thesis was also nurtured by professor of history Paul Ocobock. In a course called “Gender & Sexuality in Modern African History,” Adam was inspired to consider this topic as a research subject. “Professor Ocobock’s class was awesome,” he said. “It got me very interested in Africa, and speaking with Professor Ocobock about the subject opened doors for me as I considered where to take my academic approach.”

After reflecting on his summer research experience, Adam has a piece of advice for those who want to engage in research. “No matter what your field of research is, you can still do something that matters for actual people.” Through his research, Adam was able to give an academic voice to a community of LGBT individuals in Uganda that desperately desired it. Because of him, people will be better able to know firsthand how this marginalized group struggles to survive and thrive as a community.