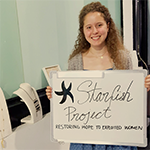 Slavery was formally abolished in the United States in 1865 by the 13th Amendment to the Constitution—today, all countries have abolished slavery However, slavery continues to exist in practice in the form of human trafficking, which is often called modern-day slavery. Victoria Erdel’s (Class of 2019, sociology) curiosity to learn more about the impact of human trafficking on its victims led her to complete a summer internship helping trafficking victims using her written and visual communication skills.

For seven weeks, For seven weeks, Victoria worked with Starfish Project, a jewelry-making social enterprise in Asia that helps previously trafficked women establish careers and gain their independence. Victoria was a marketing and communications intern who helped the organization share the stories of women who were sex trafficked. “As an intern, I began by creating behind-the-scenes content for their social media accounts,” Erdel said. “However, during my third week I was assigned to come up with new ways to share the women's stories.” That new mode of sharing stories came in the form of videos visualizing each woman’s experiences. Each video consists of Victoria drawing out the narrative of a given Starfish worker, which turns a person’s tragic story into a work of beauty and hope.

Victoria's interest in working with Starfish Project started when she was 13 years old. She met the group’s founder when she gave a talk at Victoria’s church in Mishawaka, a town only a few miles away from Notre Dame. The talk inspired Victoria to learn more about human trafficking and how to fight it. During her sophomore year at Notre Dame, Victoria believed that she was now in a position to help the Starfish Project using a skillset developed during her first two years at the University. She learned about the marketing internship opportunity available to work directly with the women of Starfish Project in Asia.

The experience was valuable for Victoria, but it did not come without its difficulties. Going to a place where the dominant language was Chinese without any knowledge of it posed a challenge for Victoria. “I was worried about how I would be able to communicate with others, but I am glad that it went smoothly in the end.” Victoria said. Given the subject matter of Starfish Project’s activities, it was inevitable that the experience would be an emotional one for Victoria. “I had to be emotionally prepared to collect the stories from the women there. Some of the things they dealt with were quite dramatic,” Victoria said. Despite the difficulties of the internship, Victoria was inspired to continue her work on human trafficking once she came back to the United States.

This semester she started a podcast that puts herself and other students in a position to have discussions about human trafficking. The podcast, titled “The Trafficking Dispatch,” is meant to briefly provide information about human trafficking to college students. Coming up with the idea for the podcast was simple for Victoria, but carrying it to fruition carried its own challenges. “Getting it started was kind of difficult, especially with getting logistical things straightened out and finding students to work with.” Victoria said. Three students now work on the podcast, and they have produced six episodes to date with four more scheduled for the rest of the semester.

Victoria's passion for fighting human trafficking doesn’t stop at the podcast. She hopes to go back to Asia during winter break to help with Starfish Project’s collective efforts as she begins to conceptualize her senior thesis. “I am now certain that I want to research the intersection between art/communications and anti-trafficking social enterprises,” Victoria said. Beyond that, she is also interested in attending graduate school to continue to learn more about human trafficking and its detrimental effects on society. You can find more information about Starfish Project and learn how to help on their website. Episodes from Victoria’s podcast can be found here.

Thank you to Paul (ND ‘71) and Jane Roberts, whose support of the Roberts Endowment for Undergraduate Research in East Asia made Victoria’s work with the Starfish Project possible.