Charles Cong Xu (environmental sciences, class of 2014) spent much of his time as an undergraduate at Notre Dame conducting research both in the lab and out in the field. He worked in Dr. Jeffrey Feder’s lab on the speciation genomics of Rhagoletis apple maggot flies and collected fruits housing maggot flies across the southwestern U.S. He also conducted fieldwork sampling for environmental DNA (eDNA) in the Great Lakes wetlands while working in Dr. David Lodge’s lab on aquatic environmental DNA with PhD student (now Dr.) Cameron Turner.

"The summer after my freshman year, I remember I was processing deer mice in an old garage in Nebraska where I was assisting with fieldwork during my internship at Harvard University," said Xu. "I looked around and saw there were spider webs clinging everywhere. After a year of working with eDNA in Dr. Lodge’s lab at Notre Dame, I thought to myself, 'If you can find DNA of fish in the water it's swimming in, there has to be DNA of spiders and maybe even their dinner on spider webs.'"

Xu and Turner convinced Dr. Lodge to fund a small project. They first needed to find a place to house the spiders. Xu reached out and started a collaboration with the local Potawatomi Zoo. He was able to install spider boxes there that he built from scratch. The team introduced three black widow spiders into the boxes and fed them house crickets to noninvasively extract, amplify, and sequence mitochondrial DNA from their spider web samples. This DNA identified the species of both the spider and its prey. This kind of noninvasive genetic sampling enables biomonitoring without the need to directly observe or disturb target organisms. 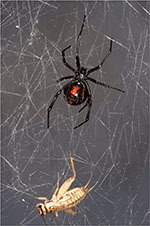 The detectability of spider DNA did not differ between assays and spider and prey DNA remained detectable at least 88 days after living organisms were no longer present on the web. These results may encourage further studies that could lead to practical applications in conservation research, pest management, biogeography studies, and biodiversity assessments. However, further testing of field-collected spider webs from more species and habitats is needed to evaluate the generality of these findings.

“It's kind of obvious in retrospect,” Xu said, “but sticky spider webs may be a 'natural' DNA sampling device for DNA from the spider, and from what it's been eating. Using black widow spiders and house crickets, we discovered that spider webs can be used to detect DNA of spiders and their prey. This DNA can stick around for some months after the spider is gone. We already know that spider webs can trap insects, pollen, dust, and anything else that’s been blowing in the wind —who knows what other creatures’ DNA might accumulate in a spider web? Spider webs could be used in widespread biodiversity assessments and environmental monitoring to look for invasive, endangered, or pest species.”

After collecting and analyzing the data, Xu wrote a paper based on the study with support from Turner. This paper is now being published in PLoS ONE, an international open access journal. You can access the article for free. A full citation is at the end of this article.

As an undergraduate, Xu was a member of the Sorin Scholars program through the Center for Undergraduate Scholarly Engagement (CUSE) at Notre Dame. This program identifies through a competitive application process a cohort of exceptionally engaged students at the end of their first years at the University. CUSE then works with this multidisciplinary group during their sophomore, junior, and senior years to help build intellectual community, support research and graduate school goals, and participate in individualized mentoring and programming.

“I had close access to CUSE staff and was able to regularly engage in stimulating intellectual discussions with other students who were equally passionate about research,” Xu reflected on his time in the program. “CUSE enabled me to conduct a summer internship at Harvard University on evolutionary genetics and helped fund me to present research at a national evolutionary biology conference in Utah. Dr. Thibert also helped read over drafts of my MEME application and offered some useful advice. I wouldn’t be where I am today without the support of CUSE.” 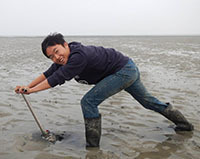 Xu in the Netherlands as part of the MEME program.

Xu is now a student in MEME (the Erasmus Mundus Master Pogramme in Evolutionary Biology), a joint program between four European universities and Harvard University. He is currently based at Uppsala University in Sweden working on estimating giant panda abundance using genetic mark recapture from noninvasive fecal samples. Next semester, he will be at the Kunming Institute of Zoology, part of the Chinese Academy of Sciences, working on identifying mammal species in the forests of Vietnam and Laos from DNA of blood collected by leeches. You can learn more at Xu's personal website.

Xu concluded, “It just goes to show that science doesn’t care if you are just an undergraduate. An interesting scientific idea can come from anywhere, even from a freshman in a garage.”