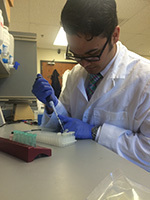 Dominic Acri is a sophomore taking full advantage of all that Notre Dame has to offer. He has a double major in Neuroscience & Behavior and Film, Television, and Theatre. He is a member of the Balfour-Hesburgh Scholars Program. He is a Writing Center tutor. He is a Student Intern on the Multicultural Student Programs and Services team. He works in the lab of Dr. Giles Duffield. And those are only the things he has done since he arrived on campus.

Dominic’s first exposure to Notre Dame came even earlier, however, after his junior year in high school.

Summer Scholars participants spend two intense weeks on campus as part of a cohort of 20 students pursuing one of over 20 programs of study. The program allows students to get a feel for what life is like as a Notre Dame student, from taking classes, to exploring the campus, to interacting with other prospective ND undergraduates.

During that summer, Dominic met Professor Mark Olsen and Professor David Veselik of the Department of Biological Sciences, who co-direct the Life Sciences program for the Summer Scholars. Dominic notes that “they were a really big part of introducing to me how science, especially research-based science, works at Notre Dame. That’s one of the biggest reasons I was attracted to Notre Dame.”

In between classes during Dominic’s first summer in the program, the students were invited to listen to talks on campus, usually given by professors explaining their research. Dominic attended one of the talks given by Dr. Giles Duffield, an Associate Professor in Biological Sciences.

Dr. Duffield studies the molecular biology of circadian rhythms in mammals and mosquito vectors.  Dominic was very interested in his presentation and research. When he returned for his Balfour-Hesburgh summer in 2014, after graduating from high school and committing to Notre Dame, he reached out to Dr. Duffield in an email.

“His research really interested me, because at the time he was one of the few professors on campus conducting neuroscience research. The behavioral sides of his research were what interested me most,” Dominic said.

Dr. Duffield met with Dominic, and they had a great conversation about research and opportunities on campus. Dominic had a lot of questions. At the end of their conversation, Dr. Duffield offered Dominic a spot in his laboratory as a first semester freshman!

“If you really don’t know what you want to do,” Dominic points out, “the first step is going to these talks where you get to see what kind of research people are doing on campus. One of the most important things is to know that this is the first step into the research community—be an active listener. Have questions to ask. Because I had questions, and was an active listener, I was prepared to engage with a scientist in the field.” 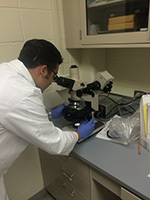 He started working in Dr. Duffield’s lab in his second week at Notre Dame. He worked directly with a postdoctoral scholar on circadian biology research: studying the natural rhythms of life from cellular to physiological levels. Dominic worked mostly with mosquitos in the lab, starting first by doing blood feedings to keep the mosquito colony thriving.

“The work that I’ve done so far has been mostly with activity rhythms in Anopheles mosquitoes, as a way to approximate their biting and mating behaviors, in the hopes that there is a way to control vector species by altering their circadian rhythms,” explained Dominic.

One major effect of this research could be controlling the spread of diseases by mosquitoes, especially malaria.

“It’s a different approach than some researchers take, but it’s interesting to me because it incorporates a behavioral aspect that normally isn’t taken into account when it comes to vector control and capacity in general.”

He continued to work in the lab part-time during the rest of the academic year, but his passion for what they were studying grew. He wanted to be able to continue his work full-time over the summer after his freshman year. But he would need funding if he was going to live and work at Notre Dame during those months.

With a suggestion from his Balfour-Hesburgh mentors, Dominic researched different grant opportunities across campus. Dominic worked with a member of the Undergraduate Research team in CUSE to prepare his grant applications, and he was ultimately successful in a highly competitive pool of 112 applications to CUSE for summer research grants. In addition, he applied for, and was granted, awards by Balfour-Hesburgh, the College of Science, and the First Year of Studies Research Ignition Grant program.

“It was an awesome experience, as a freshman, to be able to secure that kind of funding,” Dominic said.

“He came back with all this data. I was charged with organizing certain parts of the data; creating graphs and looking at how the field typically works with this data. It became a collaborative effort between me, a senior in the lab, the post-doc, and several other people,” said Dominic. “We worked to look for differences between these two species in Australia that hadn’t been looked at too much before. After looking at them, we found some differences in their circadian biology, specifically around the time of peak activity. Those differences hopefully could be employed by vector-control scientists to prevent the spread of disease.”

The ten weeks ended quickly, and Dominic prepared to head back to classes as a sophomore. Dominic is continuing his work in the lab this semester. He hopes to take some of what he learned in the summer and replicate the same experiments using different species, locations, or other variables. In addition, Dominic and his colleagues in Dr. Duffield’s lab are in the process of preparing their summer work for submission to a peer-reviewed academic journal. Dominic will be listed as a co-author on the submission.

“I took a graduate-level seminar, Topics in Physiology, in my lab to get a taste of what graduate school would look like. That really helped me decide on pursuing a career in research. Graduate school is definitely looking like the way to go,” said Dominic.

Dominic’s research ties in closely to his Neuroscience and Behavior major at Notre Dame, a collaborative effort between the College of Arts & Letters and the College of Science, which combines aspects of psychology and biology into an interdisciplinary degree. As their website describes, "this major creates a context for scholarly conversation about the nature of mind, brain, and behavior. It engages experts across diverse fields, including biological sciences, chemistry, computer science, engineering, linguistics, mathematics, medicine, philosophy, physics, and psychology."

Dominic appreciates being part of a program that is new and developing. He finds that it gives him the freedom to pursue his true passions. It leaves room in his curriculum to explore interesting biology and psychology electives. He does not have to focus on just biological causes for actions, or just psychological causes—he can pursue both avenues in his research. 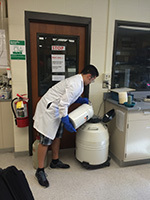 “The big part about the neuroscience major—even right now, I’m just saying ‘neuroscience’ to describe the work that I do,” Dominic said. “But the name of the major is ‘Neuroscience and Behavior,’ so there’s this whole other aspect of the major that I don’t think comes to people’s minds.” Dominic wants to continue pursuing behavioral research after his time at Notre Dame.

When he’s not working in the lab, Dominic pursues his second passion: being on stage as part of Notre Dame’s Film, Television, and Theatre major.

“It’s something that’s always interested me. It’s one of the few things that I have done that is really able to take my mind off science for the right amount of time,” Dominic reflected.

“It’s just something I love to do,” Dominic said.

As he continues his work, Dominic hopes to present at a national or regional conference with his lab team before he graduates. He wants to perform in more shows on campus and in the community.  He wants to study abroad; pursue research internships on other campuses; and be more involved in the South Bend community. He aspires to pursue a Ph.D. in a neuroscience-related program. Dominic still has two and half years at Notre Dame—plenty of time to research, perform, listen, and ask questions.

“The opportunities are there,” Dominic says. “You can’t be afraid of sending the emails and going to an office and getting in touch. You’ll never know if you don’t.”

The Center for Undergraduate Scholarly Engagement (CUSE) at the University of Notre Dame would like to thank Paul & Maureen Stefanick, whose generous gift helped make Dominic's research possible. If you would like to support undergraduate research at ND, if you're a current ND undergraduate interested in learning more about research, or if you'd like to learn how you can help Dominic, visit http://cuse.nd.edu.