Copenhagen has been great so far!  I’ve been on some great day trips in Denmark so far. I visited Møns Klint, some beautiful cliffs by the seaside in Denmark.  I also spent time in Arhus, the second largest city in Denmark, visiting their Teaching College. I also got to visit the Fredriksborg Castle and the Kronberg Castle (where Hamlet was set) for my philosophy class.  We read Kierkagaard while exploring his favorite places to write in Denmark for a weekend. 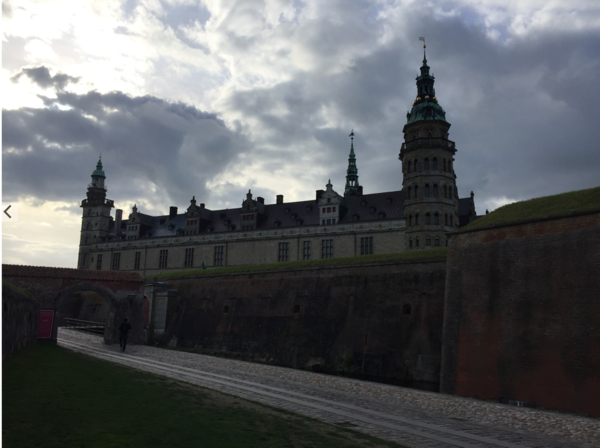 I also have been teaching English in a special education school every Thursday since I have been here.  The kids are amazing, and I’ve learned so much about the Danish education system in general. One thing that is really cool is the amount of autonomy given to children—we visited a forest kindergarten where 3-6 year olds spend time in the woods year round.  They even sleep outside for nap time! They help to cook the lunch, facilitate their own games and activities, and are basically given free reign over the forest. I saw some 5 year-olds cutting tree branches with handsaws! In class, we talk about how this philosophy often leads Danish children to be more independent in the long run.  Children learn from an early age to take ownership of their learning!

One of my passions is inclusive education, and Denmark is currently in the midst of some pretty heated debate about whether inclusion is really the best solution.  In 2012, a controversial policy in Denmark coined “The Inclusion Law” set a goal of having 96% of students in the general education population by 2015, indicating that almost 10,000 students in special schools would need to be transferred to public schools.  However, while the number of students in general education increased, the amount of funding per student decreased by 12%. A lot of people now associate inclusion with efforts by the government to cut spending on education—which has led to backlash from teachers.  Also, while lots of students were transferred from special education schools to general education schools, teachers were not appropriately trained in how to best teach in an inclusive classroom. Resultantly, many students with disabilities fell significantly behind their peers academically and even regressed.  It has been interesting to discuss the process of moving toward inclusive education with the Danish educators I work with at my practicum site.

I live in the Outdoors Living and Learning community at DIS, which is awesome! I live with nine girls in an apartment right near the city.  Every Thursday, we have group events. So far we have been kayaking, cooking over a campfire, and biking. This has been really cool, because Denmark has some amazing sites to camp at and is just generally very beautiful.  We had an overnight camping trip 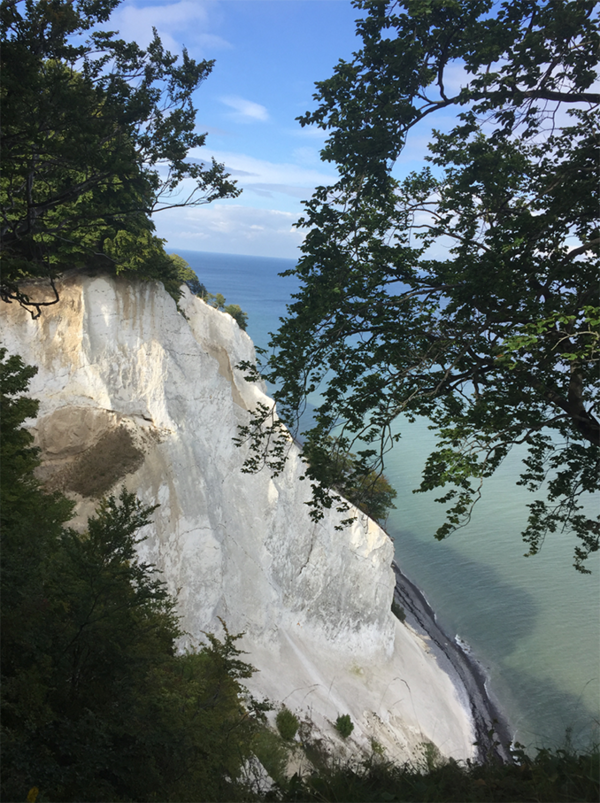 next to the Prime Minister’s house in the woods on one of our first weekends! I also learned how to pitch a tent with one tarp, a rope, and a knife. It has been really fun to challenge myself to be a little more adventurous and spontaneous through all of our outdoor activities!

I’m looking forward to going on a trip to the Czech Republic and Paris over fall break.  Then, shortly after, I will be traveling to Finland to study one of the highest rated education systems in the world.  I am also really looking forward to exploring more of the City of Copenhagen. I have been to Nyhavn (the place with the pretty houses and boats), center city, and freetown Christiania so far.  I’m hoping to explore more castles and get to the see the little mermaid too! 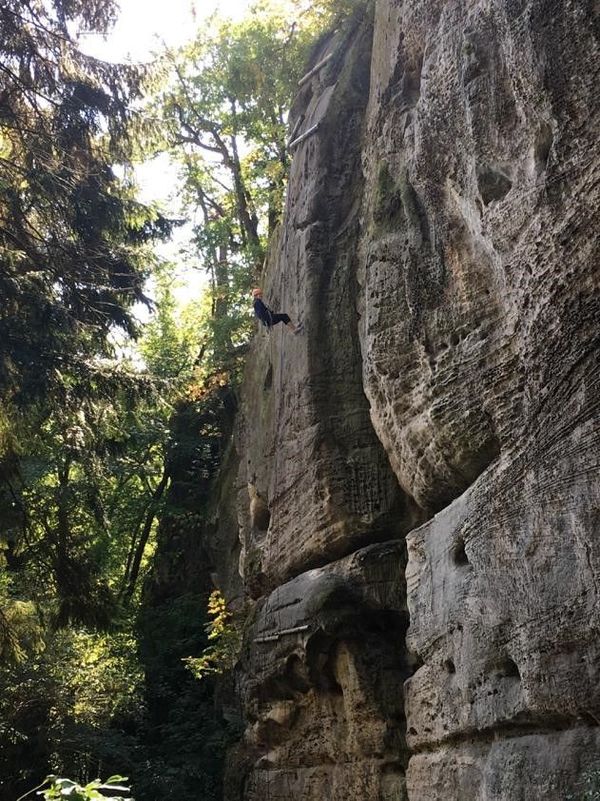 October started off great with my fall break! I visited a castle at Hrubá Skalá in the Czech Republic, where I rock-climbed, ziplined, and hiked.  It was incredibly beautiful.  I even learned how to repel on this trip, which was really fun.  I learned about the history and design of Czech castles, and spent five days doing various outdoor adventures!  We also spent two days in Prague, where we went on a dinner cruise on the Danube river!  The architecture was incredible. For the second half of the travel week, I went to Paris! My favorite part was visiting Notre Dame and Sacre Coeur.  A close second was the AMAZING food!

I also had a great month of teaching! I teach English to a class of 6-8 year olds with special needs every Thursday, and I think I am finally getting the hang of lesson planning.  Halloween is a relatively new holiday in Denmark, so I had fun introducing the kids to American Halloween traditions, like trick-or-treating, and reading fun Halloween stories.  I also learned a lot about the TEACCH method for teaching children with Autism, which focuses on scheduling and visual learning. 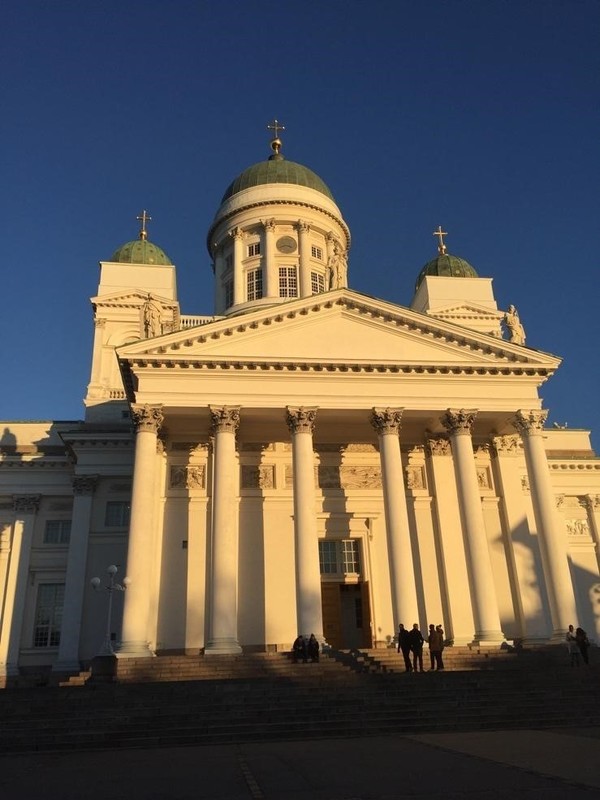 In the last week of October, I went to Finland to with my Child Development class! Finland consistently ranks extremely highly in the PISA assessments conducted by the OECD.  What is particularly interesting is that Finland is great at creating safety nets for the bottom 25% of students—they have one of the lowest achievement gaps in the world. We visited a day care, which focused on play and appealing to an international student population.  We also visited a public school, and it was really interesting to see how the Finnish education system takes aspects of the Danish and American systems.  Finnish children have a similar level of freedom, autonomy, and interaction with nature that Danish children do, but also a fast-paced, structured classroom environment, which is more similar to the U.S.  The Finnish public-school teachers were incredibly efficient, and classroom management was incredible, especially since most classes have multiple students with special needs fully included in the typical classroom. The teachers are also some of the most educated and most well-respected professionals in Finland, and it was noticeable.  I am excited to take my knowledge of the Finnish education system back to the U.S.  In Finland, we also got to visit the Helsinki Cathedral and the Rock Church, which was incredible.  Finland also had some cool islands that we visited outside of class time.

October in Copenhagen was unforgettable!