Hello from the Emerald Isle! My name is Danica Crowley, and I am currently a junior Sorin Scholar abroad in Dublin, Ireland. I am an IT Management major and Sociology minor studying at Ireland’s largest university, University College Dublin (UCD). Today marks just 26 days since my arrival and the first of a series of blog posts to come. Thanks to the wonderful Notre Dame Dublin program staff, it has been a month packed with new experiences and great people. In this short time, I have had the opportunity to explore and engage with the local Dublin community, travel around the country of Ireland, and even take an independent excursion to London. In fact, this blog is going to only cover the first week of my time in Dublin because 700 words cannot capture the month!

Within the first few days of being in Ireland, all ND students at UCD took the train to the nearby fishing village of Howth. While there, we hiked along the cliffs of Howth Harbor, appreciating its breath-taking views and local flora and fauna. With Howth as one of my first impressions of Dublin, and the country as a whole, I knew right away that I was extremely fortunate to be abroad.

The following weekend, we took our first overnight trip – to Northern Ireland. The trip began early that Saturday morning as we bussed to the Northern Ireland capital of Belfast for a tour of the city. Our tour explored the consequential past of the city, especially in regards to the Troubles of the late 1900s. Murals covered the city, telling the story of a troubled past and hopes for the future. We were guided to areas of significance including the Falls Road, the Shankill Road, and the “Peace Walls.”

After our tour, we stopped in at the Titanic Belfast, a museum dedicated to the building of the RMS Titanic. The museum itself is located on the land which used to be the Harland & Wolff shipyard. If I am being completely honest, my primary source of information on the Titanic was the 1997 James Cameron film, so it was interesting to dive deeper into the ship’s history, impact, and place in the city of Belfast. Taking in details, from the number iron rivets used to build the ship to the dinner menus to the letters and testimonies of passengers, all made the story come alive. 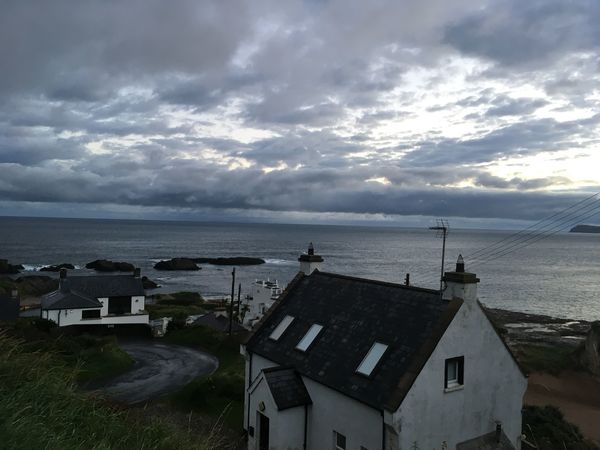 That evening, we bussed further north to the gorgeous harbour of Ballintoy. We arrived under stars, but even in the dark, Ballintoy was a remarkable place. From my study abroad in Dublin so far, our night in Ballintoy stands out as my favorite. We stayed in a small hostel called the Sheep Island View Hostel (aptly named too, as there were huge herds of sheep abound) and took our evening arrival as an opportunity for a late-night hike down to the beach. We climbed up “Elephant Rock” and took in ocean. Ballintoy is what I dreamed Ireland to be – endless green, gorgeous cliffs, a testament to natural beauty.

A sunrise walk to the beach and a quick breakfast later, we were packed up and headed off to the Giant’s Causeway. The Causeway is a unique rock formation consisting of hexagonal basalt columns– 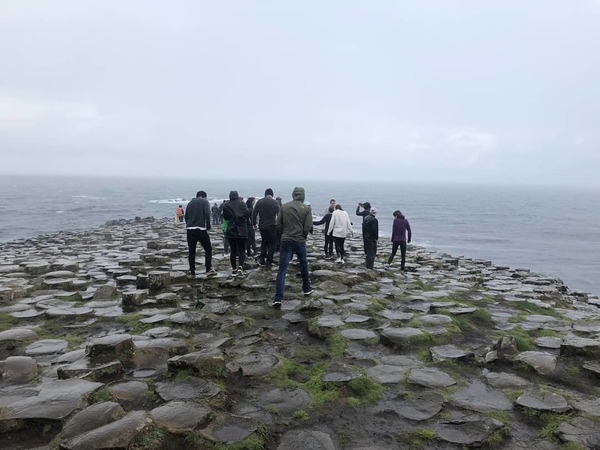 and the hike to get there was gorgeous. In fact, I got my first taste of Irish weather while there. It went from sunny to an absolute downpour and intense wind within minutes (We all had to huddle together for warmth!). Definitely an experience but well worth it!

Our next stop was Derry, where we went on a walking tour with resident Mark Lusby. Mark told us of the city’s past, with a focus on historic sectarian divides. He discussed the lasting impacts today (as evidenced by walls and murals similar to those in Belfast), but he also kept an eye to the future as the community works to bridge the Catholic/Protestant divide. After the tour, we departed for home – back to Dublin. 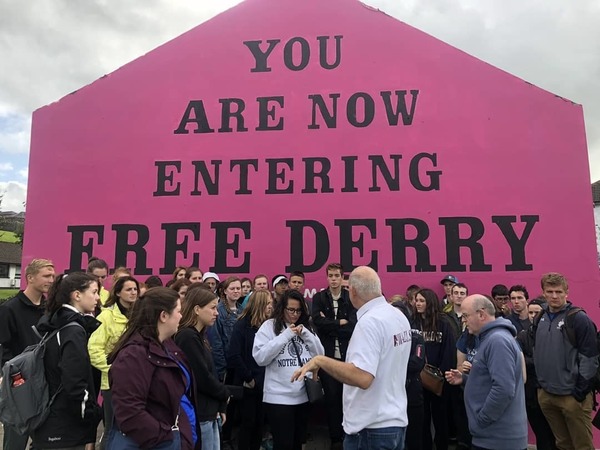 All of this was just the first week of my study abroad (classes had not even started!), and it has not slowed down since. There have been new experiences aplenty and, I do not doubt, more to come. Here are a few highlights after the first week: we all cheered on Dublin at the women’s Gaelic Football final, classes have started, I started Community Based Learning at Lourdes Day Care, I joined a couple societies on campus, and a group of us spent the past weekend in London (went to the National Gallery, ate delicious food, visited friends at ND London, and more)! This weekend we will be heading out on our second overnight trip as a program, to the West of Ireland. Looking forward to next month’s adventures!

Hello again! The second month of study abroad in Dublin is just now coming to a close, and it has certainly not slowed down. This month, like last, has been jam-packed with new experiences, incredible travel opportunities, and periods of growth.

An Excursion to the West

We closed September with a weekend trip to County Clare, one of the most iconic counties in the country of Ireland. Our journey began with the obligatory stop for tea and scones at Tyrrellspass Castle, and shortly after, we set off for Corcomroe Abbey in the rocky Burren. Corcomroe Abbey is an early 13th century Cistercian monastery and a National Monument of Ireland. The church no longer has its roof, but the ruins are still decorated with original detailed carvings and ornamentations preserved for hundreds of years. To get an even better look, we climbed the adjacent hill and gazed upon the abbey and the surrounding limestone Burren landscape. 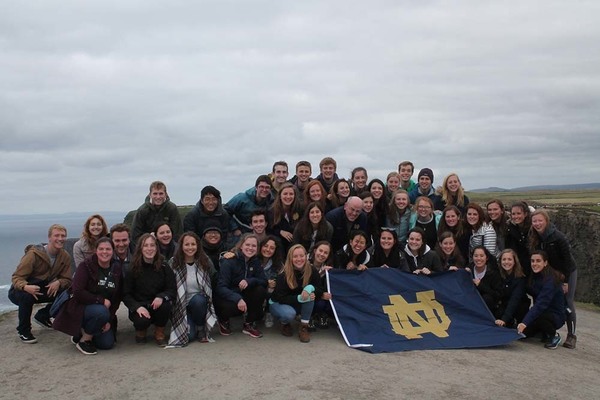 Of course, a trip to the West of Ireland would not be complete without a stop at the internationally recognized Cliffs of Moher. After our stop at Corcomroe, we continued on to the coast and made our way to Ireland’s most well-known sea cliffs for our last stop of the day. A visit to the Cliffs of Moher makes it quickly obvious why they are so popular. We hiked along the edge, taking in the views and getting our steps in. Although they don’t properly do the cliffs justice, I’ll let the pictures speak for themselves!

We kicked the next morning off with Mass at a small church located in the quiet village of Fanore. Lucky for us, St. Patrick’s Church was celebrating their harvest festival that Sunday and welcomed us for the special occasion! The community welcomed us with open arms and following a beautiful ceremony, we stuck around for baked goods, tea, and conversation. I honestly found getting to know some of the Fanore locals to be one of my favorite moments in Ireland. St. Patrick’s Church served as an ideal example of what community should look like – welcoming, genuine, and fun.

For the rest of our time in County Clare, we made a few stops. We climbed down the rocks to Lahinch Beach, visited the portal tomb of Poulnabrone Dolmen (dates back to between 4200 BC and 29000 BC) and read poetry in front of Mullaghmore Hill.

The next weekend, we did something a little different from the usual, and I am incredibly grateful that we did. The Notre Dame program spent one weekend at a wonderful camp called Barretstown. Barretstown offers free, specially designed camps and programmes for children living with serious illness as well as their families. We were able to volunteer at one of these weekend camps, acting as “caras” (friend in the Irish language) to the campers. We played games, shared meals, and just got to have fun.

If anyone reading this is considering going abroad, I would highly recommend finding some way to integrate yourself and engage with members of the local community. Whether that’s joining a sports team, doing Community Based Learning (CBL) with the Center for Social Concerns, or volunteering for a weekend, just getting involved will really make your study abroad location become more of a home. 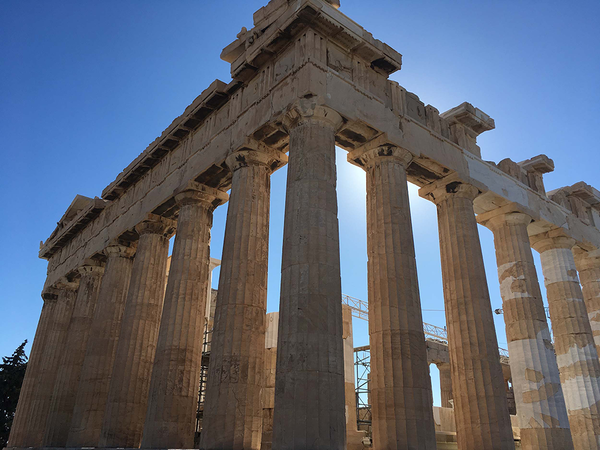 For the first time this past weekend, I traveled to Athens and Santorini, Greece. We had an extra day off so a group of us escaped the Dublin cold and took an excursion to warm weather. During the weekend, we visited the Acropolis in Athens, ate more gyros than we probably should have, swam off the coast of Santorini, and watched the sun set over the white and blue buildings of Oia.

These were just some of the significant highlights of the month but certainly not all. Each day abroad is another chance to try something new. Throughout October, I made my way to Dublin’s own mini Oktoberfest, watched a performance of Hamlet starring Oscar-nominated Irish actress Ruth Negga in the title role, learned a bit of traditional Irish dancing, spent a weekend in the harbour village of Skerries, celebrated Halloween in the Irish countryside and much, much more.