I am currently studying abroad in Athens, Greece for the Fall Semester of 2018. I have been in Athens for a few days shy of a month, and I have absolutely love my time thus far. Each student is placed in an apartment with other students, but the number of roommates in each apartment varies. I have four roommates, but I love each roommate. Our apartment is large enough for it not to feel crowded with five girls, but it is small enough in which we have been able to become really close. My roommates and I travel, cook, and workout together. Before my arrival, I was reluctant about having four roommates, because I did not know if we would get along. However, the first night we stayed up all night talking and laughing. 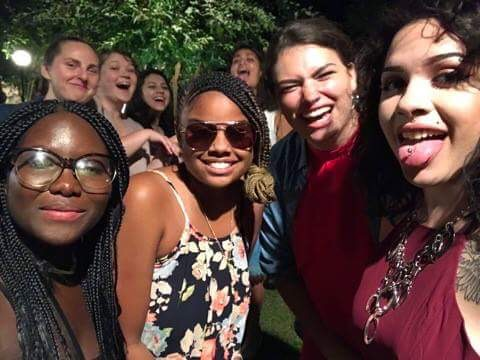 The experience of having an apartment is a liberating one. I immediately felt a new sense of independence and responsibility. Our apartment is one of the largest ones, but it is also one of the furthest ones from our school (approximately seven minute walk). Nevertheless, our location is amazing, because we are surrounded by stores, restaurants, and parks.

Surprisingly, I did not have trouble with adjusting to the time change. The first night I slept amazing and did not feel jet lagged. The hardest thing to adjust to is balancing my schoolwork with my exploration of Greek culture. Studying abroad feels you with excitement to want to do everything and do it everyday, and it can become easy to put your schoolwork to the backburner. For example, we do not have classes on Friday, so we are able to travel the weekend. If I was studying on campus, I would never in a million years think about spending my weekend to travel, because I would have anxiety about not having enough time to finish my assignments. However, I have this desire every week while I am abroad, because there is so much to see and I do not know when I would have the opportunity again. 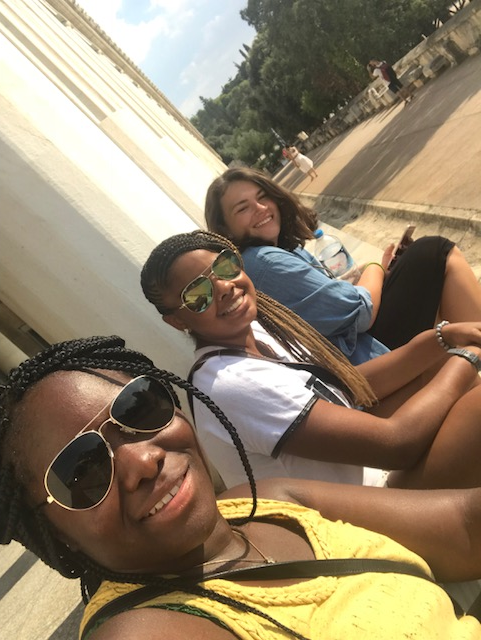 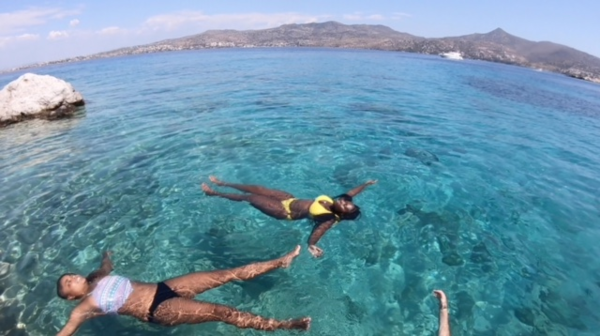 One of the  weekends, my roommates and I traveled to the Greek island, Aegina. This trip was amazing! During our time on Aegina, it was their Pistachio Festival (famous for pistachio), and there were so many samples of various pistachio dishes and ingredients such as pistachio butter, pistachio honey, pistachio chocolate, and pistachio bars. My mother loves pistachio, so I was able to get her some pistachio butter as a gift. Also, the beaches of Aegina were beautiful. There were not a lot of tourists around and the water was so clear (image to the left). We would spend hours in the ocean and relaxing on the beaches. I personally love the water and swimming, so it is times like these on the beaches that I most enjoy.

As mentioned before, we have class Monday through Thursday. I have four classes on Monday and Wednesday in which I start my day at 8:45 AM and end at 6:50 PM. However, on Tuesday and Thursday, I have one class at 11 AM. I love my classes, because I am able to take interesting Anthropology courses that are not offered at Notre Dame such as Introduction to Digital Archaeology. My Topography of Athens course is on-site which means we always meet at a different location in Athens for class. I am on the edge about this class right now. As much as I love not being in a classroom setting, it becomes frustrating trying to find the meeting point in which I sometimes walk for 40 minutes.

Greece is a beautiful country full of culture and history. The CYA program provided every student with an ICOMOS card allowing free access to museums and sites anywhere in Europe. This makes it easier to visit the various museums that Athens has to offer which I enjoy doing often. 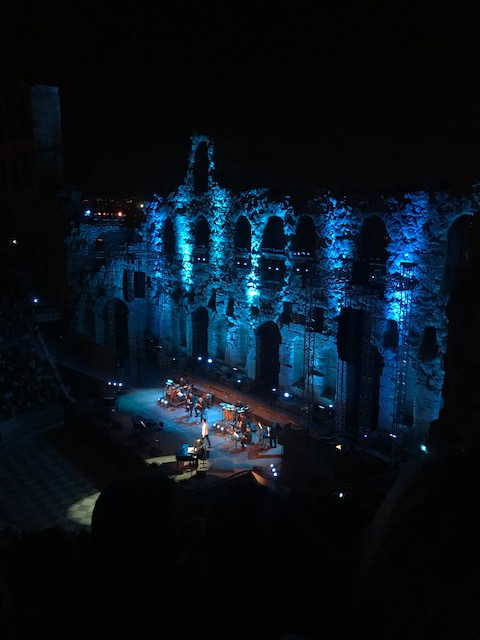 One of the first weeks, I went to a concert at the Herodus Atticus Theater in which three well known composers and singers performed together (second image to left. It was amazing, especially since since the Acropolis was in the background.

Also, the CYA has implemented trips to different islands throughout the semester in which students are required to attend. We have traveled to Crete and Delphi so far. Both were so beautiful and had its own unique cultural background which was cool to witness and identify while traveling. During each trip, they take is to important archeological sites, museums, and other tourist attractions such as relaxing beaches. The food in Greece is delicious in which you can order a very large donut or gyro for just one euro! I am foodie, so I enjoy trying new Greek dishes for a cheap price.

One of the five courses that I am taking this semester is The Topography and Monuments of Athens. This is one of my favorite courses. Every class is on-site which means we always meet a new location such as a museum or historical site in Athens. During this course, I learn about the topography, archaeology, and history of Athens while visiting and touching the same walls I read about. The class will cover all of the major sites of Athens which provides me with a complete picture of ancient Athens in its social, urban, and historical contexts. One of our classes consisted of us walking around Athens as we traced the ancient circuit wall. Although I could trace the wall by looking at a map, it was an entirely new experience to walk and touch the walls in class. So far, we have visited the Philopappos Hill, Kerameikos, Agora, the Acropolis Museum, and the Acropolis. 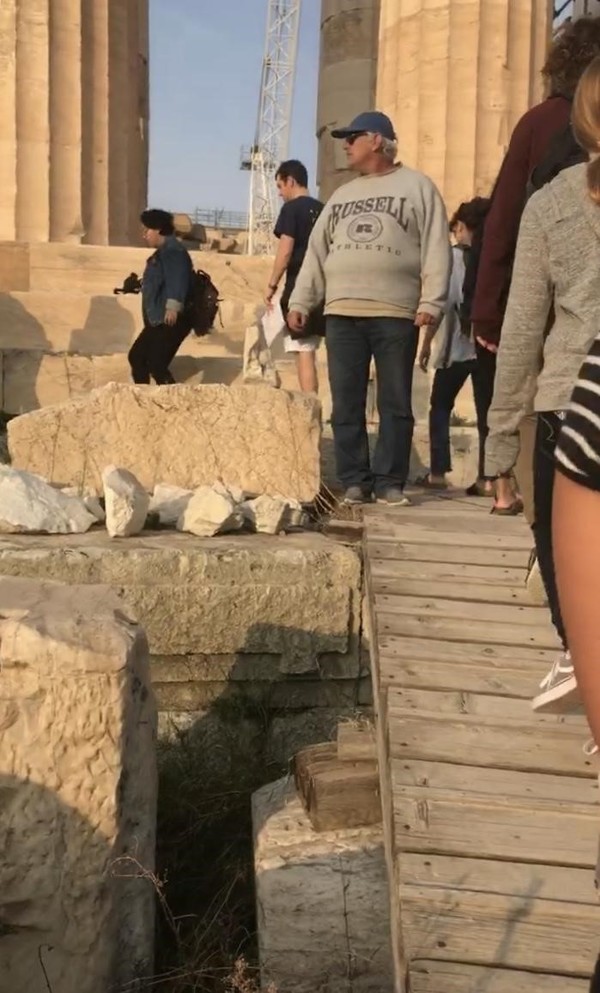 Most recently, we visited the Acropolis. Thankfully, we will spend five classes on the Acropolis. My professor has organized our class in a way in which we will study the Acropolis in chronological order starting in the Neolithic and Bronze Age periods. My favorite class was when we spent the day learning about the Parthenon. Not only did we learn about it, we went inside the Parthenon.

The Parthenon is not accessible to the public, because, for the last few years, the Parthenon has been under restoration. However, this did not prevent our class from getting access. Our entire class felt special as one of the workers dropped the rope allowing us to walk up the steps of the Parthenon. We had been on the Acropolis for two days before we were able to enter this captivating structure. When we were finally able to walk up the steps and touch the columns, it was surreal. My classmates and I could not contain our excitement. We could see other tourists pointing at us as we stood in the middle of the temple.

When I stood in the middle of the temple, I realized that it was larger than I had imagined. The columns towered over our class while we listened to my professor. I gained a greater admiration for the architecture of the Parthenon, because its details were more visible. Also, it was nice to see the restoration up close. I watched as the workers--who I found out were professionals from Crete- fluted the columns. I even got dust blown into my face on several occasions. I kept reminding myself that the dust was worth it, because not everyone could say they had dust from the Parthenon in their eyes. Yet, it still burned a little. 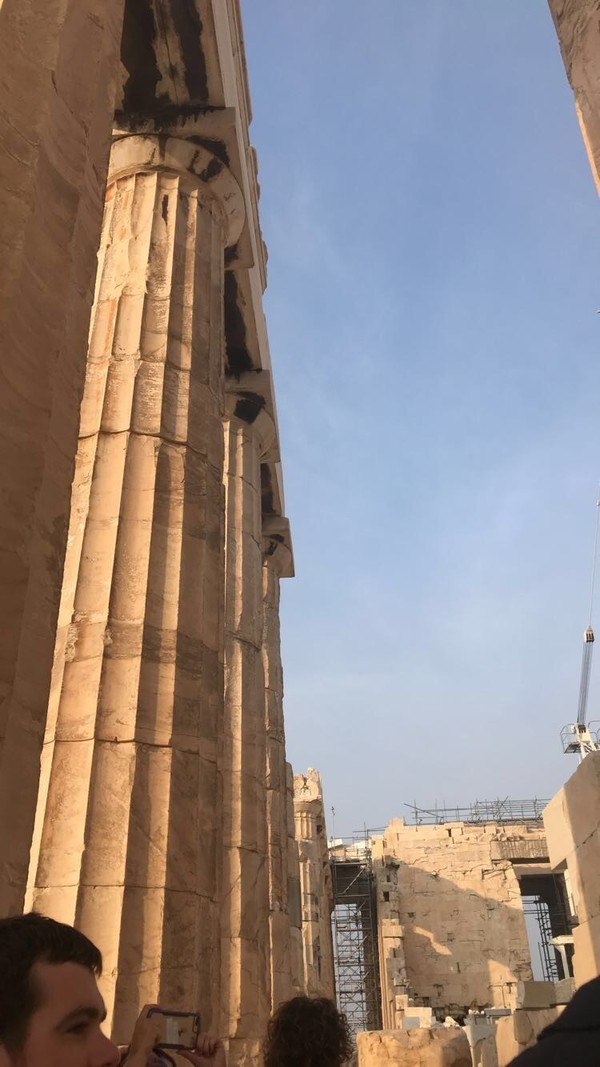 Nevertheless, one of the most admirable characteristics of the Parthenon that I could not see outside of it was the detail in the columns. The ancient Athenians were so meticulous in how well the columns were structured. The space between each block is so tight that not nothing can in between it, not even a thin piece of paper.

Overall, the class inside the Parthenon will be one in which I will never forget. Also, I would definitely recommend people to take this course while studying abroad. Yes, you will get to special access to different sites in Athens, but you will also be able to travel through ancient times in a first hand experience that allows you to view Athens and its history differently than other students.