My name is Mary Hilliard and I am a junior Business Analytics and English major currently studying abroad in London. I can’t believe how time has already flown by- London is an incredible city and one semester is simply not enough to really explore all it has to offer. As the famous Samuel Johnson quote goes, “When a man is tired of London, he is tired of life.” 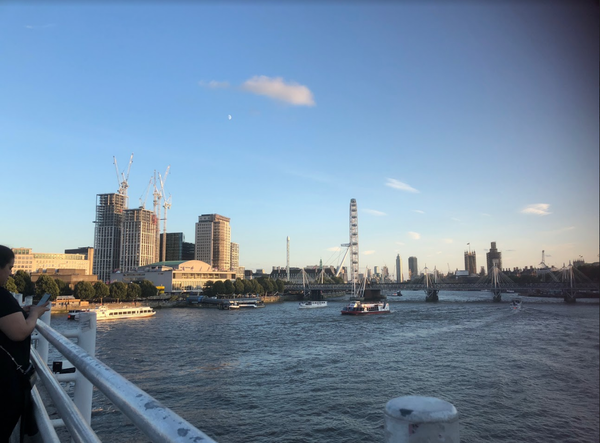 One of the best experiences living in London so far has been the “Inside London” course conducted through the Notre Dame Global Gateway. The first three Fridays are dedicated to sessions we signed up for over the summer that allow us to explore parts of London we may not have otherwise had the chance to. For instance, there are sessions touring the Victoria and Albert museum, walking around London’s East End neighborhood or Camden Town, or learning about the Great Fire of London.

My first session was called “Homelessness in London”, and I served at a soup kitchen called the Companions of the Order of Malta. I am really glad that this was my first Inside London session, because coming from a suburban neighborhood in the States, the number of homeless people I saw in my first week in London was a bit of a shock. By helping at the Cafe on Thursday, I was able to do some tangible service on their behalf, as well as discover a bit more about the housing problems in London.

One thing that specifically stood out to me was in our brief orientation, Kate, one of the main volunteers, explained to us what our jobs would be, and highlighted the importance of just sitting and talking to the guests. She told us that often, the people who visit the Cafe literally have no social interaction or fellow human contact on the streets. We often only think about the physical needs of the poor- having enough food and water, finding shelter, preventing illness, practicing good hygiene, and the like. As a result, we may find ourselves neglecting their emotional needs. As social beings, to live primarily in solitude despite being in a busy city would have just as negative an impact as going to bed hungry in some respects. In conversing with the guests, they are seen and valued, and their inherent human dignity is honored. 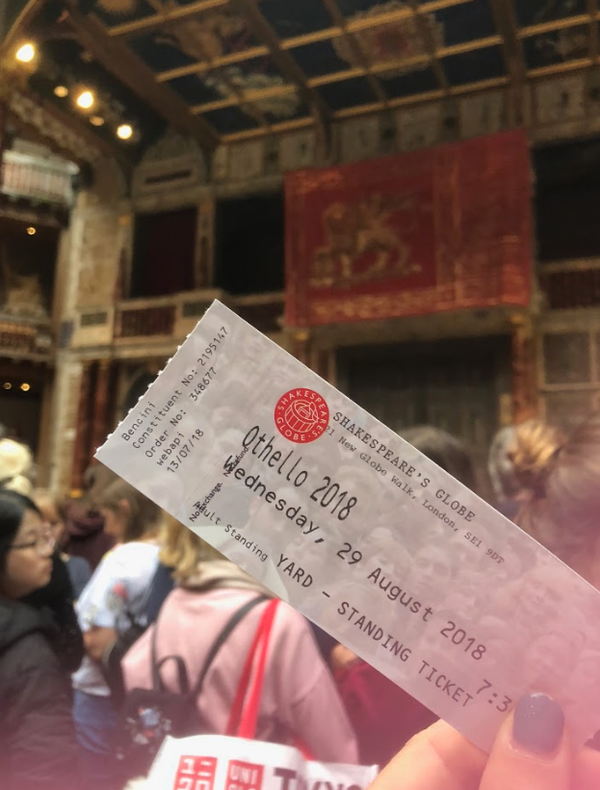 Our Inside London sessions take place in the morning, followed by a program-wide lecture in the afternoon. The second week, an organizer from another local homeless shelter came to speak to us about his experience serving London’s vulnerable communities. Again, he emphasized the psychological toll homelessness can take on someone. He also explained the immense need for adequate mental health care for the homeless, because often, people end up on the streets because of some traumatic emotional experience, rather than simply losing a job.

It’s easy to pin homelessness on just not being able to afford a home- seems valid, right? But it’s so much broader than finances. Many people end up on the street because of damaging experiences in their pasts, not just because they could not pay rent. Because of these commonly assumed misconceptions, I understand a little more why homelessness is such a difficult issue to resolve. If someone who works with homeless people everyday says that mental health is often the root cause of this issue, then clearly it is a vital topic that warrants more attention. 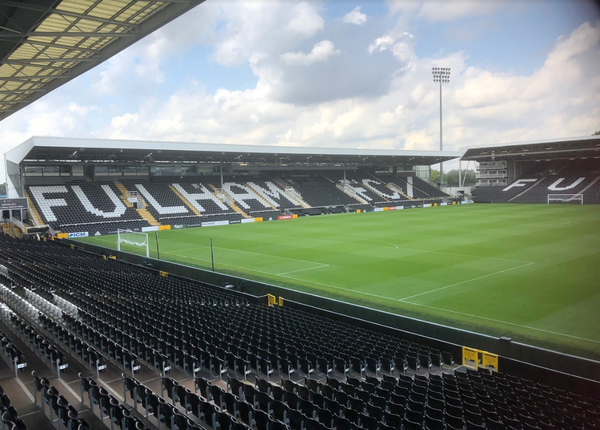 My other Inside London sessions included a tour of Craven Cottage, where the Fulham Football Club plays their matches. I’m not a devout soccer fan, but it was a cool experience to walk on the pitch and tour the locker room. Fulham just made it back to the Premier League, and they’ve got one of the most promising young players, Ryan Sessegnon, so I intend to follow their progress throughout the season. My final session was called “London Power and Politics”, and one of the professors took us on a walking tour of the Westminster neighborhood, including Trafalgar Square, 10 Downing Street, Whitehall, and Buckingham Palace. Notre Dame’s Fischer Hall, where we take all of our classes, is literally five minutes from the majority of the British government buildings. I cannot emphasize enough how we are really in the middle of one of London’s most historical and busy areas.

London is an amazing city with so much to offer as far as independent scholarly engagement- there’s no way I can visit all the historical sites and museums I want in the next two months, but I’m going to try!

Reporting live from London, Mary here- and I cannot believe it’s already time for another reflection, meaning October is coming to a close. The semester is simply moving too fast for my liking. Autumn in London has been beautiful, and one of my favorite activities has been walking through St. James Park between classes (since it is so close to Fischer Hall). The leaves are changing, the days have been sunny, and you usually get an interesting mix of professionals in suits on their lunch breaks, tourists, and families on an outing with children (and their adorable British accents) in tow. While I love London, the highlight of my month was definitely fall break. Over the 10 day break, I went to Rome, Florence, and Cinque Terre in Italy, and then Prague in the Czech Republic. With the help of some former Latin students as my travel companions, a few ND Rome study abroad friends, and my new best friend, Rick Steves, travel podcast extraordinaire, my break was jam-packed with art, culture, history and an excessive amount of gelato. 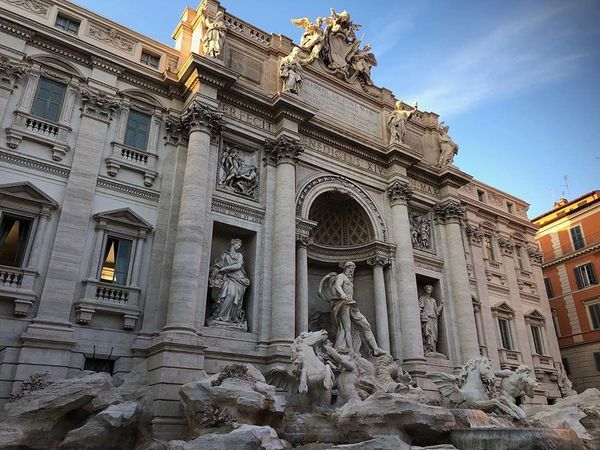 Our first stop was Rome, the eternal city, and I feel like I should preface my travel tales with the fact that I honestly didn’t do a ton of planning before I embarked on my break. I mean, it’s Rome, I was sure I would find something to do. And I was a little too right on that one, because 2 and a half days in Rome is simply not enough to really experience the rich history of Rome. But thanks to my far better planning friends, I certainly saw a lot. Highlights include the Borghese Gallery, the Colosseum (particularly gorgeous at golden hour), the Trevi Fountain (channeling my inner Lizzie McGuire) and the Santa Maria della Vittoria church.

At the Borghese Galleries, I discovered that I actually am quite interested in art as I was transfixed by the amazing 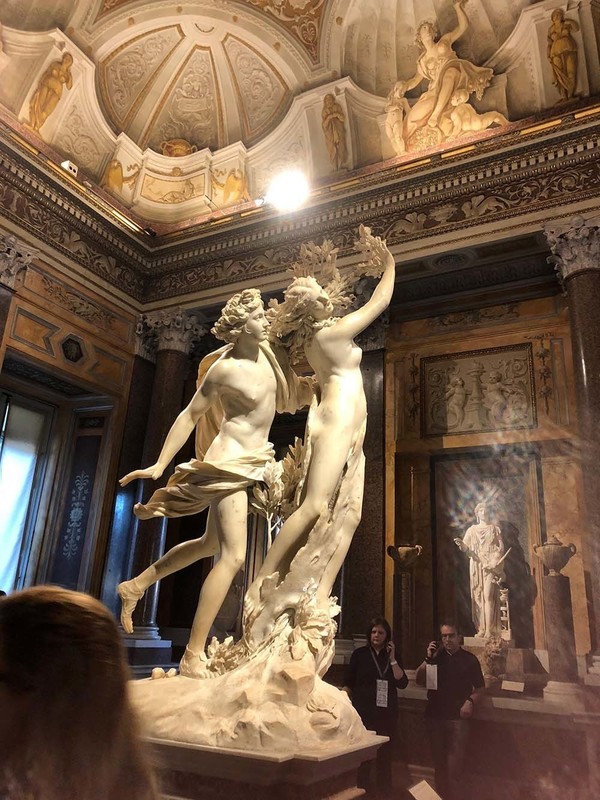 sculpture work of Gian Lorenzo Bernini. My personal favorites include David and Apollo and Daphne, but the sculptures weren’t the only attraction- the ceilings of every room are beautifully and intricately painted with bright colors and gold accents. Honestly, after all of Italy, my neck hurt from staring at the ceilings of all the galleries, churches, and museums since they are all jaw-droppingly stunning. Sounds like I am exaggerating, I know, but seriously- incredible.

The church of Santa Maria della Vittoria was a personal highlight because it is the home of a statue called “The Ecstasy of St. Teresa”, also by Bernini. The sculpture depicts a scene described by St. Teresa of Avila where she says an angel pierced her with dart and set her on fire with the love of God. My high school, St. Teresa’s Academy, is named after St. Teresa of Avila and our school newspaper is called The Dart after this statue and story, so after working on the paper for four years, it was so cool to see the namesake in person. 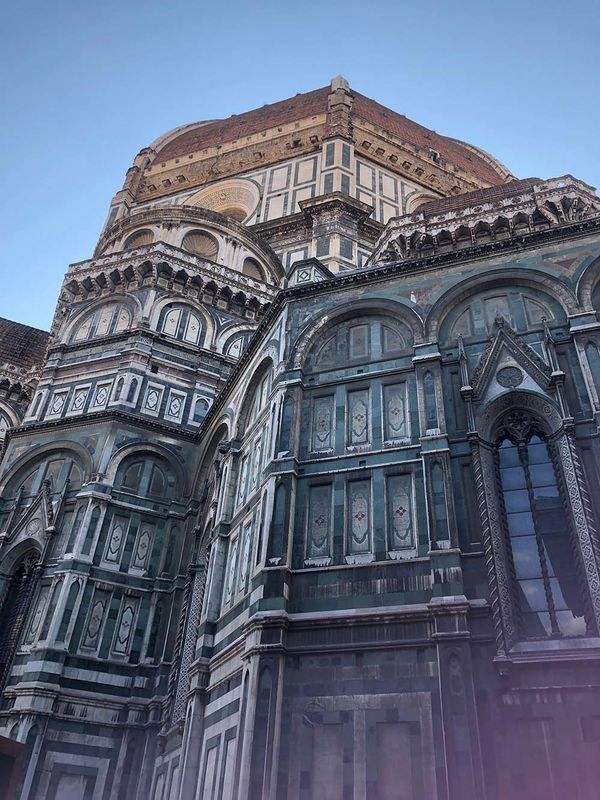 Following Rome, we traveled to Florence, where again, I had the chance to see some of the most incredible works of art and discovered a further academic interest in the Italian Renaissance, particularly the influence of the Medici family. The Medicis pretty much made Florence into the thriving center of art and commerce it became during the 15th and 16th century, and their imprint is obvious even today. Their old offices are now the renowned Uffizi gallery, and their former residences are home to current municipal government operations. The Medicis are particularly interesting because their rise to power is a very traditional American-like story- they weren’t born into nobility or royalty, instead, they started a bank and rose from the upper merchant class into a class of their own, essentially buying their rise in power. However, they also had a positive impact. Lorenzo the Magnificent, one of the patriarchs, is basically responsible for much of the Italian renaissance, and sponsored geniuses like Michelangelo, Botticelli, and Leonardo Da Vinci.

I could go on and on about the Medicis- like the numerous popes and monarchs that eventually came from the family- but I suspect not everyone will be quite as intrigued as me. But you really can’t talk about Florence without mentioning the Medicis, especially since the Uffizi Gallery was one of the highlights of the whole week. The gallery houses iconic paintings by Botticelli (think: Venus on a seashell), Raphael, and Leonardo Da Vinci. All of these works were obviously incredible, and thanks to Rick Steves, I got a room by room tour for free. But one of the displays that had the biggest impact on me was at the very end, in a more modern section.

There was a multimedia project about tourism and art in Florence, and basically, this one artist took a two minute video from one of the painting’s perspectives as group after group of selfie-stick and iPad wielding tourists would stop, snap a picture, and move on. It really makes you think about the purpose of travel, and seeing all these world-renowned pieces- are we doing it for our own intellectual and personal benefit, or for the ability to say that we have done it?

I think my time abroad has given me a new perspective on and appreciation of traveling, and I hope to be a conscientious traveler rather than tourist as the semester progresses. The next half of the semester will hopefully include some more exploration of London, too!